What we are doing to ensure a safe getaway

OMNI ARENA
Next level VR! Move freely and at full speed in 360⁰ in a virtual world. Up to 4 people can enjoy unparalleled gameplay action! Plenty of fun games for all ages. Battle zombies in Dead Zone or loot treasure and become a pirate legend in Blackbeard. Compete in weekly and monthly contests for a chance to win cash prizes!

TRANSFORMERS: VR BATTLE ARENA
A free-for-all player-versus-player battle for up to 4 players. Players move from platform to platform to avoid their opponent or to track them down for a confrontation. The attraction features 3 different epic-scale environments: Players can battle through a downtown cityscape, slug it out around a refinery, or take their battle to the docks. Player versus player or every bot for themselves!

Know When to Play 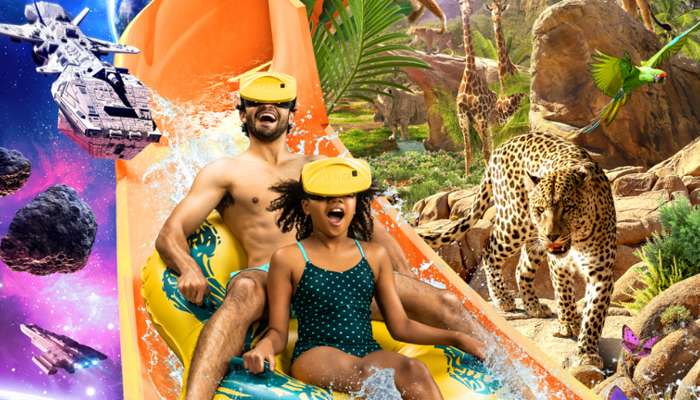 Welcome to the future of waterpark attractions. Introducing the very first (and only) VR Waterslide in the United States. This VR waterslide brings a totally new dimension to waterpark fun. With multiple immersive experiences, guests throw on the headset and are instantly launched into a new realm and they ride down the waterslide. But the fun doesn’t stop there, with multiple experiences, it’s a whole new reality every time! Because waterslides are fun… but sliding through a jungle or floating through space is a whole new level of excitement.